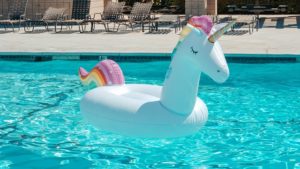 One of the questions the geothermal professionals from Symbiont Service get asked all the time is, “what’s better? A variable speed pool pump or a single speed?” We recommend variable speed pumps, and we’ll explain why and explain the differences between them so you can make an informed decision.

With a single-speed pump, the task you’re performing doesn’t matter. If you’re vacuuming, heating the water, circulating it through the pump and filter – it always runs at the same speed when, in fact, some of these tasks require more power, others less. They draw on the same amount of power regardless of what you’re doing.

The life expectancy of a single speed pump is between four and ten years and – and this can vary wildly – can cost you more than $1,000 a swim season to operate.

A dual-speed pump has a “high” and a “low” speed setting. They cost about as much to purchase as a single-speed pump but if you operate it correctly, you could save money.

With a dual-speed pump, you can use the lower speed to circulate the water. The high-speed setting is used when you’re vacuuming, running water features or have a larger than usual swimmer load.

If you forget to change the speed settings you could tax the pump unduly and that could cause it to burn out quicker and require replacement.

A variable speed pump – which we believe is the best investment for a commercial or a home swimming pool – will cost more upfront, but it will pay for itself over time.

Variable speed pumps are “smart” in the fact that they know when to run harder and work harder. If it’s circulating the water, it runs at a lower speed. When you’re vacuuming or running your water features, it works at a higher speed. The variable speed pump doesn’t require you to determine which speed, it does it on its own.

We’ve found that a pool owner can save, on average 90% in energy costs, when using a variable speed pump. This means, your variable speed pump will pay for itself in fewer than three seasons! That is a great return on your investment.

Variable speed pumps are also said to run quieter and that means the time you spend poolside could be more relaxing.

Give us a call if you’re looking to make a switch to geothermal heating and cooling and if you’re ready to upgrade your swimming pool pump to an energy-efficient variable speed model.

Symbiont Service Corp. serves Englewood, Florida and the surrounding areas. To get started, check out our website.

Stay In The Loop

How Can We Help You?