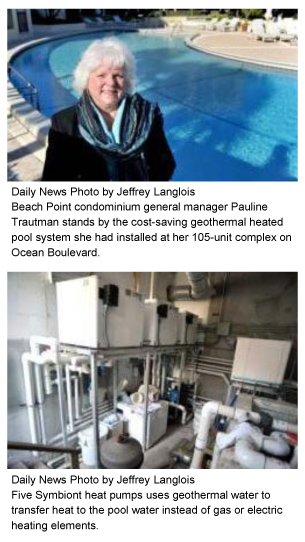 Solar power gets a lot of attention for its role as a clean energy source.

But conservation is an equally important part of the environmental puzzle.

Geothermal power still lags behind solar and wind as an alternative energy source, but simpler types of geothermal systems have been making their way into back yards in Palm Beach and South Florida for at least 15 years.

In the process, these heat-exchange systems have helped condominiums, communities and private clubs keep pools warm in winter and cool in summer.

The large pool at Beach Point condominium, 2660 S. Ocean Blvd., is an example.

In the summer of 2008, building manager Pauline Trautman had Englewood-based Symbiont Service Corp install a geothermal system for the pool and spa at the three-building, 105-unit complex. The system extracts the heat from well water and transfers it to the pool via a closed-pipe system that does not put well water itself into the pool.

The system can heat or cool a body of water efficiently because well water in Florida stays at a fairly constant, moderate temperature, around 75 degrees.

The heat-exchange system cost Beach Point $77,000. With the condominium’s gas bill now less than $5,000 a year, the system will pay for itself this year.

The change in the condo’s electric bill has been minimal, the building manager said. “I haven’t seen any difference.”

In the past two years, Symbiont Service Corp has seen demand for geothermal pool-heating systems plateau, according to salesman Terry Cicchella.

“But we’re pretty happy with that compared to the rest of the construction industry. We were increasing probably 25 percent per year previous to the downturn of the economy.”

He called the amount of money Beach Point is saving “tremendous.”

“The people who buy this most are associations that are heating with gas and they want to save money but they don’t want to sacrifice performance,” Cicchella said.

He isn’t surprised that neighboring condominiums have installed geothermal systems to heat their pools.

“You do one job and you end up with more jobs in one area. The neighbors start wanting it and so on,” Cicchella said.

Published in the Palm Beach Daily News on  Sunday, January 24, 2010. This article appeared in print on page A1.