VillageWalk of Sarasota contains town homes, villas, three- and four-bedroom homes.  After geo-thermal systems were installed in 2008 for the two swimming pools, and in 2009 at the café, some residents expressed interest in residential geo-thermal systems for their air conditioning and heating needs.  Air conditioning/heating units are starting to fail as the community ages (10 years old), and replacement options are being considered by residents.  Symbiont Service made an evaluation of the four styles of homes, to determine the proper size and ball-park cost estimate for a geo-thermal system for each style.  It also made an informative presentation about how geo-thermal works and the benefits of such a system.  Some residents were interested in using geo-thermal for their swimming pools and spas/hot tubs. 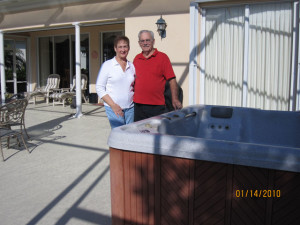 What options are available to a home owner when the time comes to replace an aging, non-effective heating/cooling system?  Replace with the same kind of system, or try something new?  The resident who was instrumental in bringing geo-thermal technology to VillageWalk’s Town Center complex (Roy and Peg Wells) is in the forefront of using geo-thermal for residences.  He chose to install the water furnace system in his home in spring 2009, using the lake behind his home as the water source. They were able to take advantage of the 30% energy tax credit for 2009 (still available through 2019 for geo-thermal).  Also, there was a rebate of $595 from Florida Power and Light.  Symbiont Service was able to position the water furnace in the garage attic, saving valuable floor space and a unit in plain view; this eliminated any outside noise from a compressor and air handler, and the unit is so quiet inside it can hardly be heard when it’s operating.

Savings of 25-30% in kilowatt usage have been realized, taking into account this year’s unusually cold winter months which necessitated more heating days.  It should be noted that desired temperatures – both for heating and cooling – are maintained at a constant level, and the system is so efficient that cooling is at a lower temperature, and heating at a higher temperature, with less energy than the previous heat-pump system.  He is also preheating domestic hot water with his system, and recently added a unit to heat his hot tub.  He has provided information and opened his home to anyone interested in the system.